THE EARLY DAYS OF FLYING WERE VERY DIFFERENT FROM TODAY 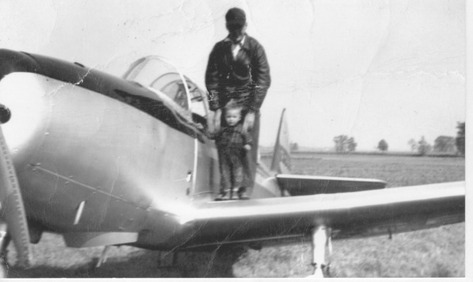 The aircraft is a Fairchild Cornell, CF-CVU, military

trainer which had been in service with the Royal

$500 to buy it. This airplane type had replaced the


Except for the Crane and Cornell, these aircraft were used to accumulate the 200 hours of pilot experience

required for a Commercial Pilot Licence, which was issued in the summer of 1951 - to this proud teenager.  I

immediately began to fly sight-seeing and charter trips from the St. Claire River, with a Republic Seabee (photo

SURPLUS AIRPLANES - MUSTANGS WERE GOING FOR $500

HERE'S A QUICK CATCH-UP FROM THE VERY BEGINNING

I was born the second son of a chicken farmer in Ottawa, 1931. We were deep

into the great depression and times were tough. By 1938 our family of five had

Toronto, seven  miles into the bush from Whitney.


One day, at seven years old, I noticed something yellow droning along high

above.It was an RCAF (Royal Canadian Air Force) training aircraft of some kind and I

must have been really impressed. The memory and feelings of that very early urge to

fly are still with me.  That day I would have been wearing gum boots, braces to

hold my pants up, and binder twine for a belt. I specifically recall leaning against a

fresh Timothy hay.  Strange, but that's how I remember it.

War moves on rubber. The Japanese had cut off all supplies of natural

rubber. So, in 1942 we moved to Sarnia, Ontario, where dad became a carpenter

in constructing the synthetic rubber plant that was crucial to winning the war.

Every male in high school was required to join the sea cadets, the air cadets, or the

army cadets. Young men were preparing for war, and my choice of the air cadets

was obvious. Air Cadet Squadron 44 was sponsored by the Sarnia Optomist Club.

Time to Fly. While rising through the ranks I was chosen to take flying lessons.

airplane up close. This familiarization flight happened in a 65hp Aeronca 7AC

Champion, two seat trainer (photo below). The instructor must have considered this

scrawny buck-teethed, pimple-faced, juvenile in military uniform as some kind of

​fighter pilot  "wannabe". The ground never did appear in any one window more than a few seconds at a time. He

even demonstrated knife-edge crop-dusting turn-around techniques. Even now I recall my broad inner grin on

final approach back at the airport. Right then I resolved that flying would be my life - no matter what. (Yellow and red


First Solo Celebration was to sneak off with the Fleet Canuck trainer and do two loops. (From then on very

little flying would happen without looping, spinning, or playing fancy with chandelles). The day following the

loops, I had climbed to 10,000 feet in Aeronca CF-DVD (photo below)  and upon leveling off, realized that in seven

​minutes I had to be back at the hangar to go for my first lunch with "the boys."  A continuous tailspin from 10,000 feet

down to under 1,000 feet was necessary to get back to the hangar in time.  Just made it. I loved to fly.

Again, the reader is reminded that flying was VERY much different back then.

Don Ellis. "The boys" consisted of other flight students who had done their first loop - a firm requirement to join

them for lunch at the airport coffee shop. Needless to say, the looping activity was not discussed with the instructors.
However, tailspins were a common maneuver that instructors encouraged students to indulge any time.

BELOW: Cornell CF-CVU in background, my Dad on left, Gil Gladu center, me right. This aircraft has a 175hp Ranger, 6 cylinder inline inverted engine. They do beautiful rolls. This crumpled and faded photo (Kodak box camera) was taken behind our house in Sarnia, Ontario, 1952.  A few of these aircraft are still flying. This particular one doesn't appear to be.  A museum back east has one in first class flying condition.  The Norwegian Air Force trained on these in Alberta - on skis. 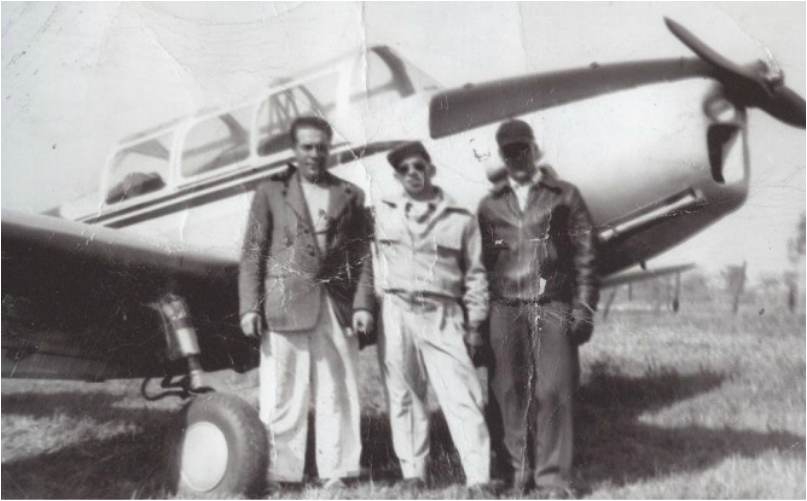 ABOVE: The Cornell as a military trainer with the RCAF Commonwealth Air Training Plan about 1942. These were sold off post-war cheap (in flying condition) to anyone with a few hundred bucks, just as also the Cessna T-50 Crane twin trainer below, plus Fleet Finches, Fleet Forts, Yales, Harvards, Ansons, and even Mustangs. A friend had an Avro Lancaster four engined bomber in his back yard still in 1960. I used it's throttle linkage rods for wing drag bracing on my homebuilt Mong sport biplane - the frame of which is pictured in the slide show above.
___________________________________________________________ 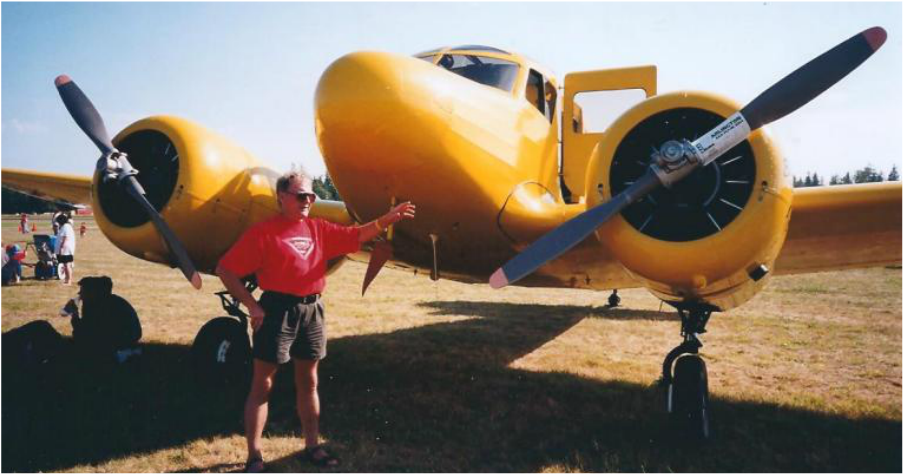 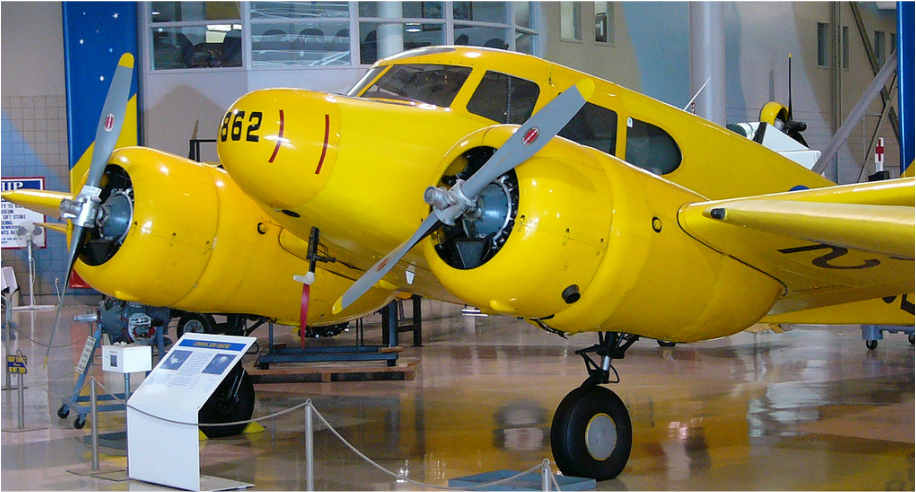 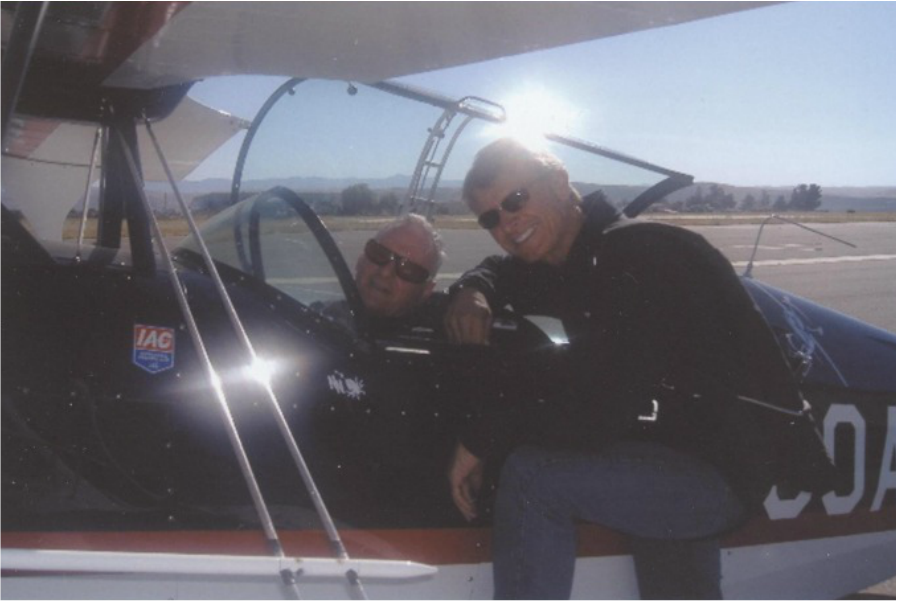 
low level (20 feet) inverted fly-pasts. This is a Pitts S-2B behind a 260hp Lycoming engine.  Play the u-tube


below for some wild aerobatic flying by Sean.

BELOW: Other training included airshow aerobatics on an Extra 300L with Ben Freelove, instructor and


Be sure to have your speakers "ON" for the background music. It's great!
Zoom to fill your computer screen.

LEFT PHOTO - At Drumheller. Chris Ostergard and I bought this fast four seater 1946 Bellanca Crusair, CF-MVY from a Saskatchewan farmer. Farthest journey was a fishing trip to Watson Lake, Yukon. Photo is at Calgary airport.
RIGHT PHOTO - Chris did most of the welding construction on the fuselage of this Mong Sport, CF-SIK.  I took it over and built the wings, ailerons, and tail surfaces.  A 150hp Lycoming engine was standing by for installation when my family moved to Whitehorse, Yukon.  We took the airplane, but didn't complete it - too busy with helicopters. This photo is in a hangar at Whitehorse. Sold - it was completed by a doctor in Edmonton and is still flying - I think.

HELICOPTER YEARS BEGIN IN 1962﻿
....but airplane flying continued mixed in
1962  Winter/Spring Helicopter training in Calgary: Bulloch Wings & Rotors.  Summer job on a Bell 47G and G-2 on floats for Spartan Air Service on a Manitoba Forest Service contract - photo on home page.
1963 - 1964.  Three of us operated a mineral exploration company.  We worked in north central BC using the
Cessna 180 floatplane and Bell 47G-2 helicopter pictured in the AVIATION NEWS JOURNAL article below. 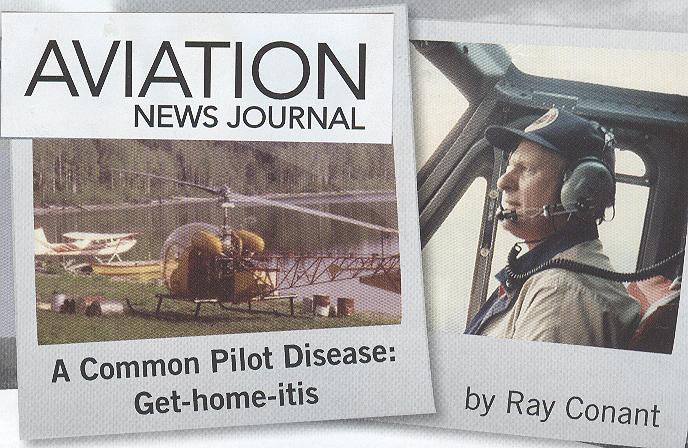 YUKON AVIATION ACTIVITY 1965 TO 1974
Moved family from Spruce Grove, Alberta, to Watson Lake Yukon in May of 1965.  Established helicopter operating base here with a Bell47G-3 for Foothills Aviation Ltd of Calgary. In the Fall of 1965 moved to Whitehorse, Yukon.
Except for two years building and operating a fly-in nature lodge in the early 70's, this was concentrated helicopter time. The 12 true stories in the book are from this period - all but one.
Google:  Tincup Wilderness Lodge, it's still operating. Check History and 1969-72. Lots of flying both helicopters and airplanes. Don't miss the photo gallery - this kind of country is a wonderful part of every bush pilot's life experience.
This vertical log lodge, built on permafrost, served well and solid for eleven years - until a fire.
It had seven double occupancy guest bedrooms downstairs and three staff rooms upstairs. One bedroom was for the registered nurse, who also tended bar, kept wood on hand for the fireplace and tidied up. For details about the lodge building and operation see the history section on their current website.
www.tincup-lodge.com    The current owner/operator has a Robinson R-44.  My Bell G-2 below. 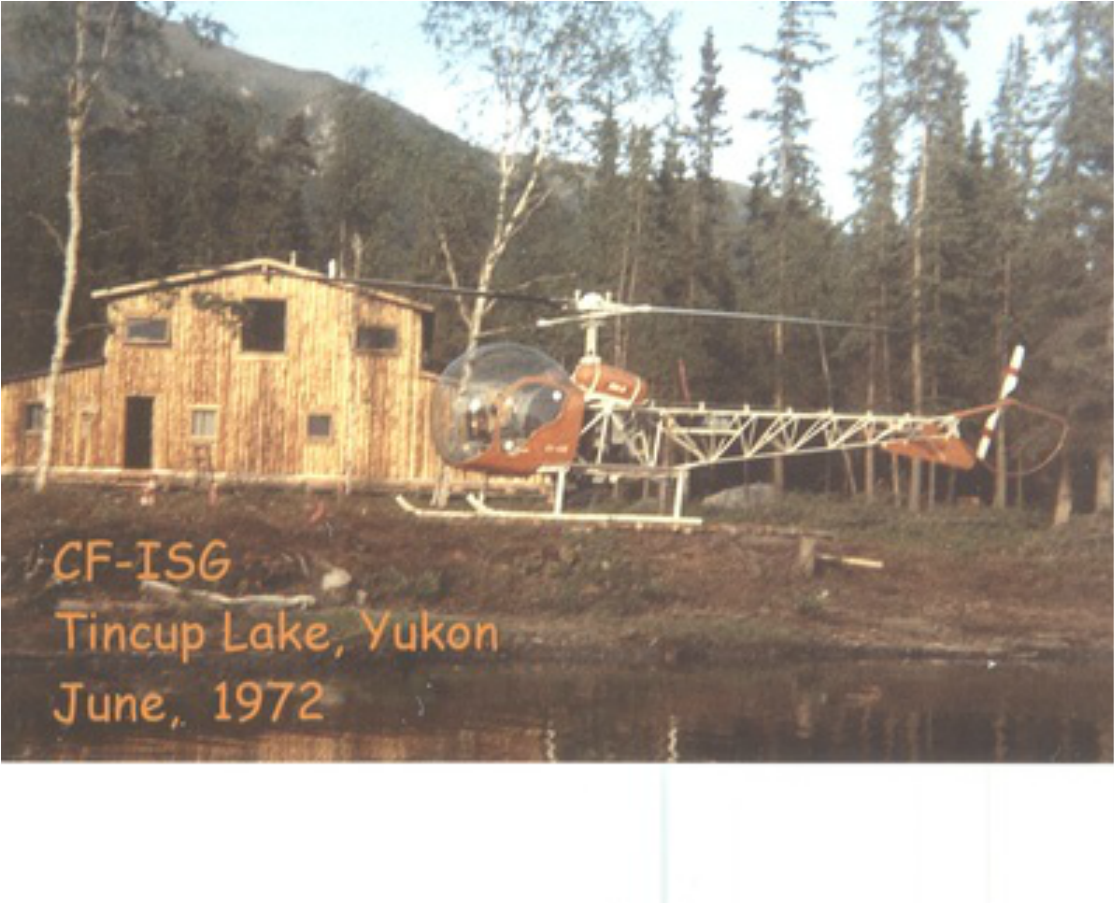 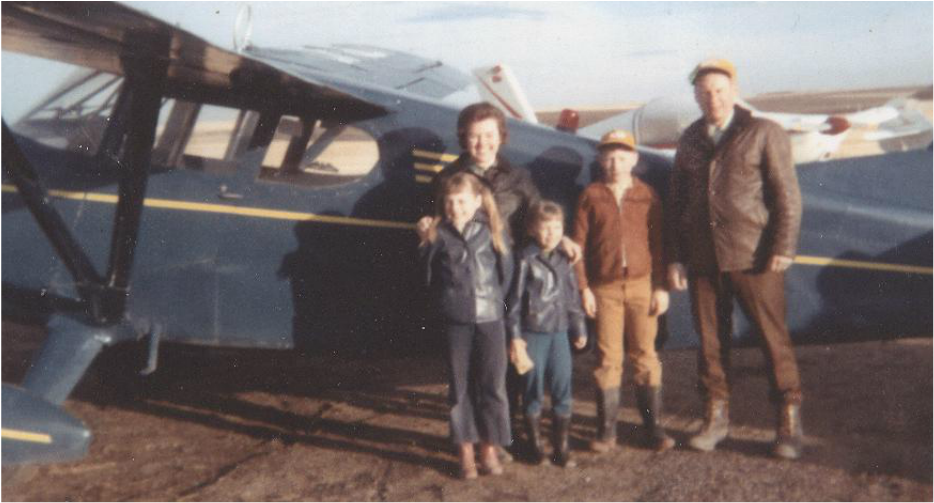 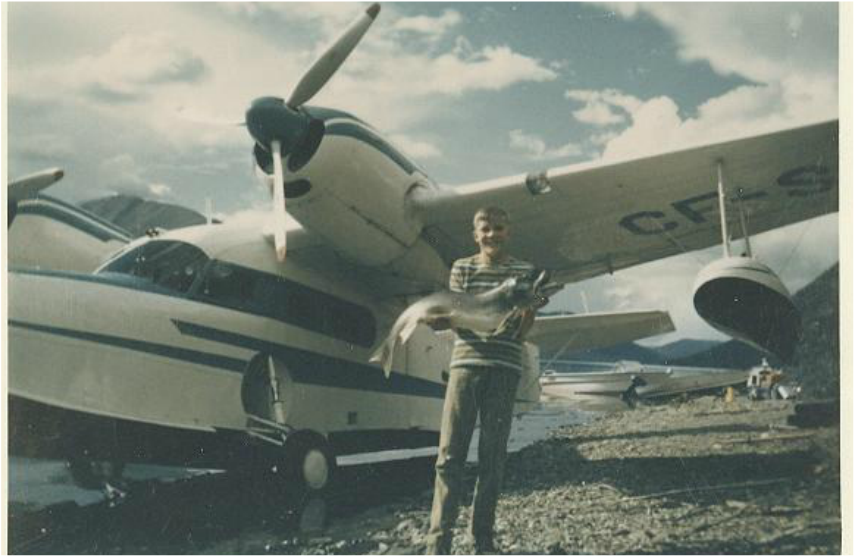 To Fly is Human - to Hover is Divine


Helicopter training at Bullock Wings and Rotors in Calgary, Alberta. Aircraft on a Bell 47G, CF-KGQ,

equipped with a Franklin engine and hydraulic controls.  Instructor Evan Bullock.  This 25 hour course was

licence.  I added five hours for good measure. Would you believe a standard going rate of $75 an hour.

financed), to be leased out for the summer. Before releasing the aircraft I flew 36 hours in five days.

Now, with a total of 61 hours toward the 75 hour minimum experience requirement for insurance coverage,

using a Bell 47-D1 on floats. (photo on HOME page is modified to G-2 fuel tanks).  These are the very early

From Then To Retirement From Commercial Helicopter Flying In 2000

and some Alaska with several long ferry flights from Texas to the Yukon. Most time on Bell 47's, Bell 206


2)  Operated a helicopter flying school in Pitt Meadows, BC from early to late summer of 1976 using

freelance instructing. Trained my son Matt in Spring of 1978 on a Bell 47G-2 at Pitt Meadows, BC.

work for BC Hydro (Book cover and Home Page photos). Subsequently did construction and support flying

towers, moving oil well and diamond drilling equipment. Instructing made up much of the off season flying.

Island.  Commutes between Pitt Meadows and Tofino utilized my wife's Cessna 150 and the Piper Apache

twin. Weather required instrument flying at times. It was handy to be instrument rated. The Honda Gold

Wing got used as well.


Co-owned and Operated Privately Over the Years - in approximate order.

In 2000 Retired From Active Commercial Flying


Occasionally get to fly a Bell 47G-4 helicopter. Put 40 hours on the Cavalier airplane before selling.

Check Internet for information on this unique and popular design.

PHOTO ABOVE:  Foreground  - Our Sonerai 2L homebuilt (2 seat), first flown in 1997. The fuselage is welded steel tubing and fabric covered.  The wings are all aluminum and designed with a racing airfoil. An honest clocked cruise at 150+mph behind a 2180cc Volkswagon engine (75hp).
Background  -  Our Cavalier 102,  all wood, built by Lothar Juraski, a work of art, and a four-time Oshkosh blue ribbon winner. We had purchased it from his widow.